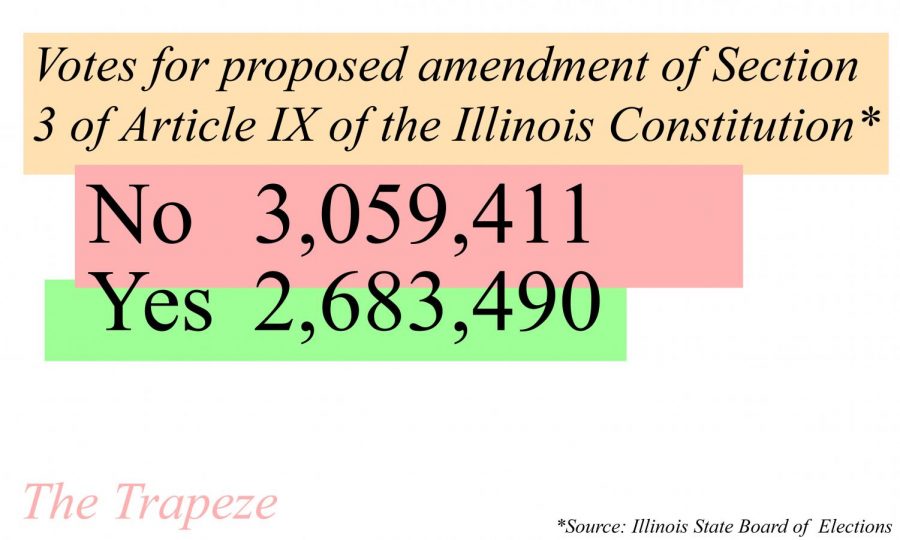 In November’s election, Illinois voters were confronted with the “fair tax” referendum on an amendment to the Illinois constitution that would allow the state government to raise or lower state income tax rates on a graduating rate.
The measure failed, with 53.3 percent of voters voting no and 46.7 percent of voters voting yes. After the failure of the measure, a lot of questions came up about the future of the state government’s revenue and what consequences the failure of the measure could have for OPRF.
The state of Illinois has long had financial issues, primarily due to pension costs for government employees. The graduated income tax would have been a way for the state to raise revenue that could increase its tax base.
Ralph Martire is a school board member and Executive Director of the Center for Tax and Budget Accountability. He described the current way Illinois Education is funded as a combination of state and local revenues. Illinois public schools are primarily funded by local property taxes. Illinois is unique in that way. “We rely as a state more on property taxes to fund public education than any other state in America,” Martire said.
“67 percent of the cost of public education is paid for by property taxes in Illinois, whereas the national average is only about 44 percent,” Martire said. State based tax revenue from things like the income and sales taxes, generally cover about 46 percent of the cost of education in most states. According to Martire, they only cover 24 percent in Illinois.
Since public schools in Illinois are primarily funded through local property taxes, the lost revenue from a graduated income tax is unlikely to have an extremely significant impact on OPRF’s resources. However, Martire added, “We can stand to lose significant funding if the state is incapable of maintaining at least a flat funding for K-12. It’s highly unlikely the state will be able to maintain funding of K-12 unless there’s some significant federal relief given to state and local governments under the Biden administration.”
Matt Baron is a school board member who believes that a major hurdle for the state is the rising pension costs. “If more and more money that the state collects through taxes goes towards pension costs, that leaves less money for all of the other stuff. It’s squeezing every other area of funding, including education; it’s at the point now where we don’t look to the state for funding,” Baron said.
“It’s a chicken-and-egg situation: the state doesn’t provide much of our funding, so we rely heavily on local sources of income. The more cash-strapped the state has gotten over the years and decades, the less we have counted on the state to fund our budget.” Baron said.
Since the state has not provided as much educational funding as is typical of states, it has forced local governments to take up the mantle. “Placing the financial onus for education on local taxpayers is a longstanding problem and that would have remained, even if the graduated income tax had been approved. Our state leaders have created this financial mess that is the worst among all 50 United States. “ Baron said.
Sara Dixon Spivy is the Board President of the OPRF Schoolboard. When asked about potential budget cuts the schools could face due to the failure of the graduated income tax, Spicy said, “I can’t imagine that in the immediate future we’d see a significant belt tightening. That being said, if the state’s not doing well we will see a decrease in revenue from the state.”
She also says that students should not fear losing any programs. “You guys (the students) are the reason we do all this. I think it would be very hard for us to ever try to cut back on any offerings we have for your students. Making sure that the classrooms are adequately staffed and the teachers have the resources they need has always been our highest priority. So, in short, don’t panic.”
While the failure of the graduated income tax may put stress on the state’s finances, it is unlikely that it will carry over into budget cuts for OPRF in the near future.