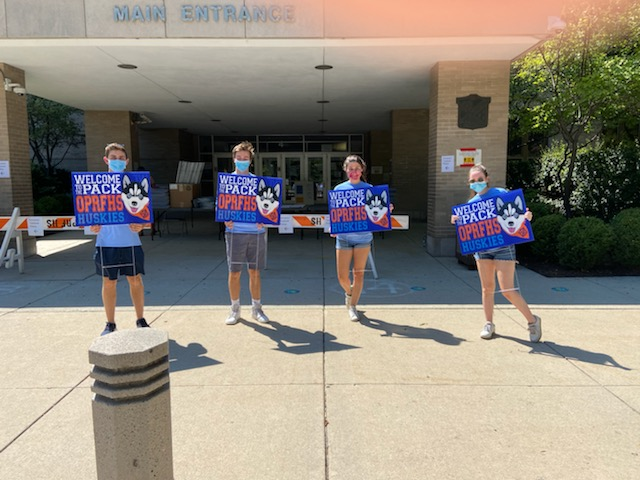 OPRF’s launch program looks different than usual this year, but the student leaders and launch students are still able to connect.

“Essentially, we’re doing the same thing, we’re just doing it in a virtual concept,” said leadership teacher Lindy Novotny. However, without study hall classes, launch leaders needed to find a different setting to do their work. “We have a really nice range of spaces that we’re going into because we didn’t have study halls to put (the leaders) in,” said Novotny. The student leaders, which this year total 126, the most ever according to Novotny, are now going into World Studies, spaces for students with special needs, and more.

Junior launch leader Amaya Wright, who was in Launch as a freshman, sits in a World Studies class and goes through the lesson with the freshman in the class. She then goes into breakout rooms with students, where she does activities with students or helps them with work. They can talk when they are done with what they have to do, Wright said.

Wright has developed relationships in the leadership class with freshmen and the other student leaders. “We learn from each other. I learn from them and I hope that they can learn from me,” Wright said about the latter. “They’re hilarious, and I love talking to them,” she also said.

TEAM Special Ed classes are spaces that the Launch program has extended to this year. Claire Downs, who teaches a special-ed class called Healthy Living, has enjoyed having the launch leaders in her class, and says that they “offer a really high level of engagement.” Additionally, Downs is “so impressed with their level of leadership, and ability to appreciate and interact with” students who are different from them.

The leaders create activities, such as scavenger hunts, for the students. Sophie Rietveld has nice words to say about the leaders being in her class. “I think that they’re very nice and they help a lot.”

The Launch leaders gain from the program as well, Downs says, by interacting with students with special needs. “It’s kind of a mutual beneficial relationship where they’re helping me out and my students out so much but they’re also gaining so much from it,” she said.

Charlie Vietzen, a senior launch leader who helps with the Healthy Living class, said, “I’m building a lot of connections, and I’m really getting to know the students.” He also said, “Their facial expressions and everything, it really makes your day.”