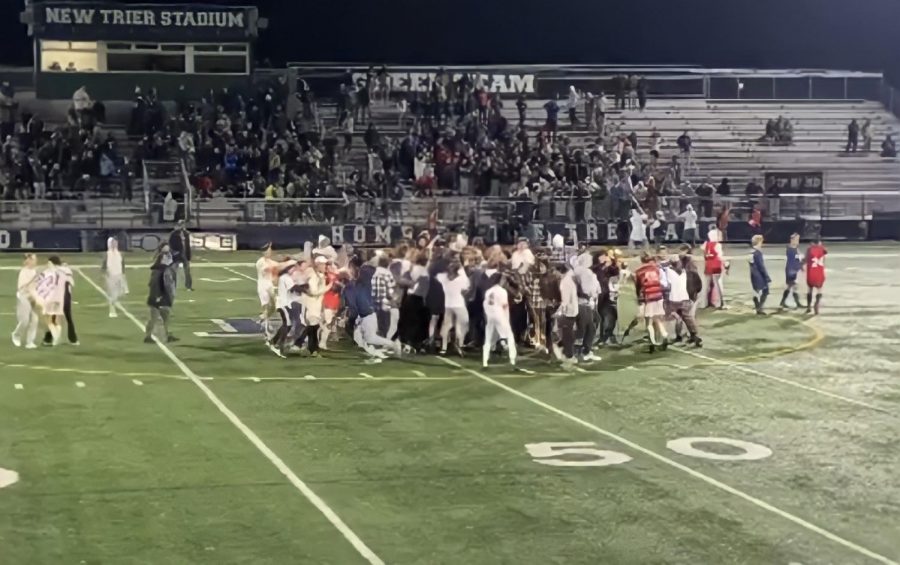 On Oct. 26, the OPRF boys soccer team took down No. 1 ranked New Trier in the sectional semifinal game of the state tournament.

After a tight 1-0 win, OPRF students took out their phones, catching videos as the celebration evolved into a rivalry between the two student sections. As they rushed the field in jubilation, the excitement that came with beating the No. 1 team in the state did not take long to result in rowdy behavior.

Two days later, a shock wave hit the OPRF community. In an email from Athletic Director Nicole Ebsen, students were informed that they would not be able to attend the sectional final game against Evanston.

In her email, Ebsen cited “unsportsmanlike behavior by… members of our student section and the extreme disrespect demonstrated at the conclusion” of the New Trier game, adding that future incidents could lead to the Illinois High School Association (IHSA) removing OPRF from the rest of the postseason.

“Some students were really disrespectful … not treating people like human beings. Most people left, but the smaller percentage, what they did was wrong.”

Ebsen mentioned that the decision was made after discussion with “the host school and the Illinois High School Association.”

In videos posted on social media, students are seen waving an OPRF flag in front of New Trier’s student section and stomping on their logo. Disruptive behavior toward the opposing coaches was widely discussed in the days following the game.

“Some students were really disrespectful … not treating people like human beings,” said head coach Jason Fried of the scene after the New Trier game. “Most people left, but the smaller percentage, what they did was wrong.”

These actions in OPRF’s student section are part of an ongoing problem throughout the state tournament.

Fried noted that during the regional championship game against Niles West, OPRF students outside of the stadium went behind the goal and continuously shouted at the opposing goalie.

These actions resulted in Fried getting a yellow card, or a warning. “It’s a huge distraction (for the goalie),” he said. “If it happened again, (the referees) were going to eject me, which means I couldn’t coach during the next game.”

Fried and senior captain Eric Jackson both emphasized the amount of support the team has gotten throughout the season and their deep playoff run. Along with more OPRF students, the winning culture the team has built has drawn more people from the community to watch soccer games. “Our crowd was getting bigger and bigger as the year went on,” Fried said.

“At the (Saint) Ignatius game, we were down one or two (goals) at half. We switched fields, and we were attacking with the fans on our side. We scored three (times) in the half and won the game,” Jackson said. “They definitely add to the energy levels.”

“We’re accountable for our actions, and most importantly, we need to be respectful and honor the OPRF name and tradition when we are representing our school.” -Athletic Director Nicole Ebsen

However, Jackson said that the rowdiness of the crowd at New Trier did not affect the team’s performance. “I would never say that it was a distraction,” he said. “Our coach always tells us that we have to stay locked in, so we’re not too worried about (the fans). We definitely celebrate with them when we can.”

“I knew if we won I was going to go on the field with (a) flag,” said senior Liam Spillane, who attended the New Trier game. “I saw a lot of excitement for our team because we felt that they had a good chance to go all the way, and we always support our boys.”

Although Ebsen says making this decision was not “pleasant,” she hopes this “becomes an opportunity for us to learn and move forward.”

“We’re accountable for our actions, and most importantly, we need to be respectful and honor the OPRF name and tradition when we are representing our school,” Ebsen said.