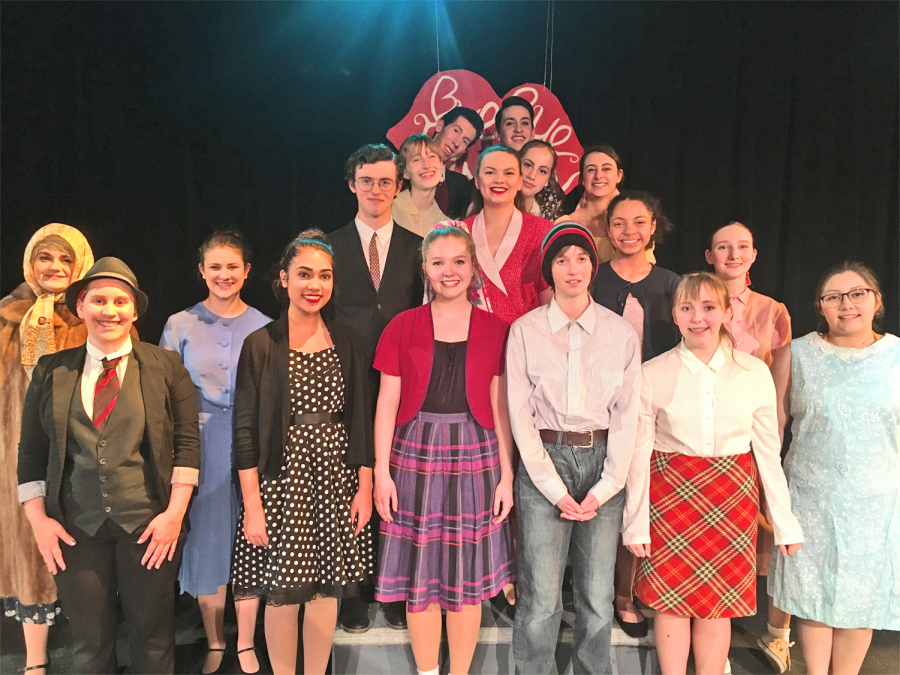 Musical productions are usually put together by several teams working together: a cast of actors who rehearse and perform, a production crew who run behind the scenes, a team of directors and choreographers who make decisions.

But OPRF’s Musical Seminar class takes a different approach: students engage in every part of the production, from picking out props to designing costumes and learning the dances. Instructed by teacher Michelle Bayer and SILC Declan Collins, the team of 17 students put on their adaption of Bye Bye Birdie for elementary students and Studio 200 audience.

The junior adaption of the musical classic, Bye Bye Birdie, follows a rock singer drafted to the military whose boss organizes a over-the-top farewell party for him, including a kiss goodbye from a lucky from an unsuspecting student.

For cast members, Indigo Gordon and Jack Zylstra, the class was more about the journey than the show. Despite his hesitance to play such the attitude-riddled lead role of Conrad Birdie, Zylstra got to practice the ability to “hone in the character” to make his experience more engaging.

Gordon took notice of the non traditional audition process, with quite a few OPRF shows under her belt, she had gotten pretty familiar with the typical process. But for Musical Seminar, the students were asked to perform a monologue on tone with the Bye Bye Birdie, a song in the 1950s style of the show, and a song which demonstrated acting or singing skills. For Gordon, auditioning with such an intensive performance in front of her class helped her “prepare and get a sense of what a college or professional audition was like.”

After a semester of costume design and staging scenes, Bye Bye Birdie was ready for the stage. Performed at two elementary schools and twice in Studio 200, the show succeeded in its goal. Students had gotten the experience of running a production and putting it on. Most of the actors are now enrolled in Directing with Bayer, with hopes of pursuing a career in the performing arts.

Despite the learning curve “since we were all people of different skill and experience,” Gordon recommends the class to people who are ready to dedicate time into the class because it gives students insight into every part of the production experience.